David Hughes has tried jury cases in both State and Federal Courts and has recovered multiple seven and eight figure amounts in cases involving automobile accidents, truck collisions, dangerous defective products and premises liability. David’s recoveries include $1,900,000.00 in a medical negligence case, $925,000.00 in a negligent hiring case, $910,000.00 in a motor vehicle accident case where his client suffered a fractured hip requiring surgery, and $550,000.00 in a workers’ compensation case. Other recent successes include recovering $13,500,000.00 for his client who suffered a traumatic brain injury in a truck collision case that involved payment by the truck broker and the truck owner. In a recent dangerous product case which involved contaminated contact lens solution, Mr. Hughes filed and handled the case in St. Louis County Circuit Court rather than becoming part of group litigation in California. This resulted in a confidential seven figure settlement for his client. He also recovered $5,500,000.00 for his client who suffered a traumatic brain injury in a construction site accident. David recently recovered $4,000,000.00 for a client injured in a premises liability case.

David Hughes resolved a motor vehicle collision lawsuit in Federal Court and recovered $400,000.00. Prior to filing suit, the insurance company offered $0. He also recovered $530,000.00 for his client who was injured in a St. Louis City construction site incident when a co-worker caused a large piece of concrete to fall and strike his spine, thereby requiring surgery. Also, recently he secured $450,000.00 for his client following a Franklin County motorcycle accident where the client required back surgery. David recently recovered $650,000.00 for a woman injured in a trip and fall premises liability case and $200,000.00 for a client who suffered a knee injury requiring arthroscopic surgery after a St Louis County automobile accident. David recovered insurance policy limits of $500,000.00 for a woman who suffered back and shoulder injuries when she was struck by a car while riding her motor scooter in St. Louis County.  David also recovered $250,000.00 policy limits for a man struck by an uninsured motorist in Franklin County while operating his riding lawn mower suffering a fractured leg that required surgery. David also recently recovered $500,000.00 one week before trial on behalf of a client related to unauthorized disclosure of a medical record (HIPAA Violation) by a medical provider.

David Hughes has been in private practice with the St. Louis, Missouri Personal Injury Law Firm of Mogab & Hughes Attorneys, P.C. since 1999. He is a native of St. Louis, Missouri. He graduated with honors from Rollins College in Winter Park, Florida, with a Bachelor’s Degree in History. While attending Rollins College on scholarship, Mr. Hughes was captain of the soccer team, player of the year for two consecutive years, and earned Sunshine State All-Conference honors in both academics and soccer.

Mr. Hughes graduated from St. Louis University School of Law in 1998. Before joining the firm of Mogab & Hughes Attorneys, he was employed by the Missouri Court of Appeals as a Law Clerk for The Honorable Judge James Pudlowski. Mr. Hughes is licensed to practice law in the State of Missouri, and in The United States District Court for the Eastern District of Missouri.

David Hughes is an aggressive attorney who believes that each client, no matter the size of the case, is entitled to his best efforts and recovery of the most money possible. Many of Mr. Hughes’ clients have become friends who refer friends and relatives who need the services of a personal injury attorney who will aggressively fight their battle with corporations and insurance companies. You will not find him on a billboard, bus or TV advertisement. Instead, David relies upon his performance for the last twenty-two (22) years and referrals from his clients and other attorneys. 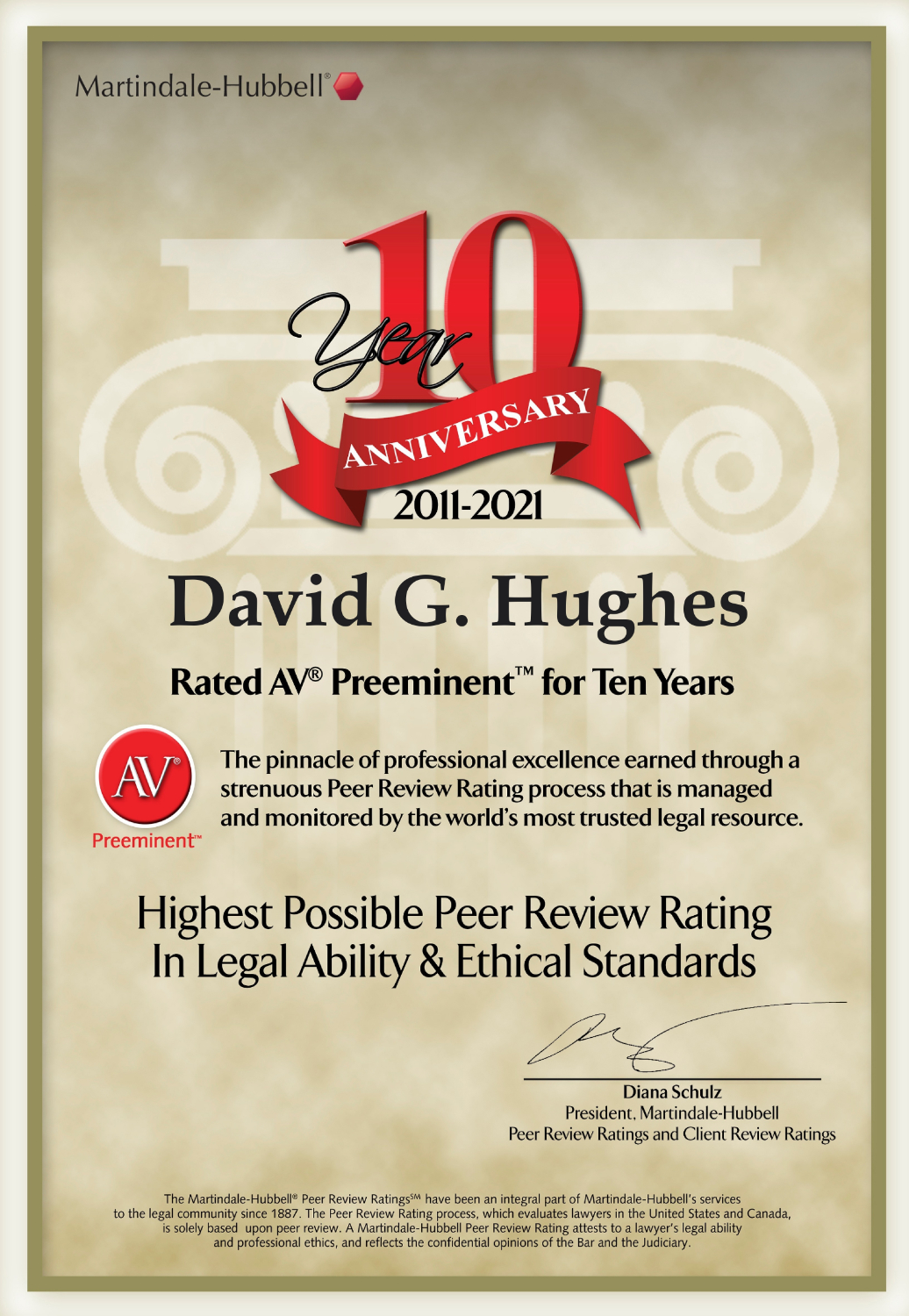